Spain has won the Nations Trophy at the conclusion of the Allianz Youth World Sailing Championships in The Hague on Friday. There are 11 new Youth Sailing World Champions across the 11 diverse events contested by this elite group of under-19 sailors. 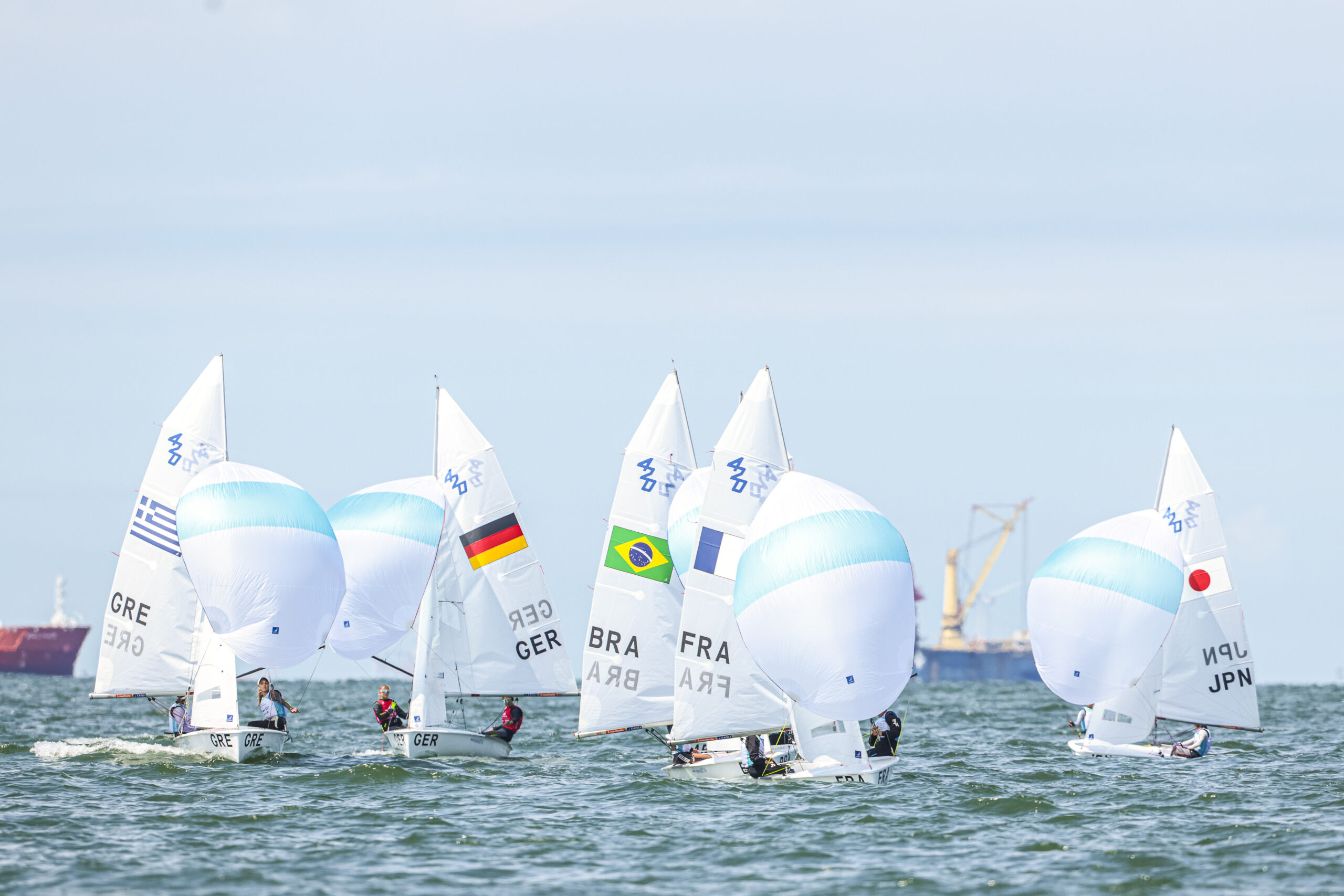 Out of the 67 participating nations in the regatta, the combined performance of the team’s sailors means Spain has emerged on top to win the Nations Trophy. Blue skies and winds of 5 to 8 knots rounded off five days of world-class competition in Scheveningen, near The Hague in the Netherlands. Strong currents and predominantly light winds made for tactically very challenging racing, with a high premium on good starting. There were double victories in some disciplines, with male and female gold going to Ireland in the ILCA 6 dinghies and male and female gold for Argentina in the 29er skiff.

Here’s how the 11 individual events played out on the water after a day that delivered a few unexpected twists and turns.

Camilla Michellini and Margherita Bonifaccio (ITA) went into the final race with the tightest of leads. There was nothing to choose between the top four boats and any of the top eight could have won gold, so close were the points. Noela Petesic and Petra Gambiraza (CRO) sailed a great race to cross the finish line in first place, which was enough to get them within a point of silver and bronze, although they missed the podium despite today’s stunning performance.

The Italians had finished in the top 10 all regatta but today’s 13th place saw them drop from gold to bronze, and the disappointment on their faces was clear to see. Amelie Wehrle and Amelie Rinn (GER) had sailed a great week but a third place in the final race was sufficient to give gold to the smiling Spanish team, Maria Perello Mora and Marta Cardona Alcantara (ESP).

“I think we are the happiest girls here,” grinned Perello Mora. “We’ve trained a lot for this, and today shows we have done a good job. There’s a lot of people watching us at home, friends and family. This really means a lot to us.” 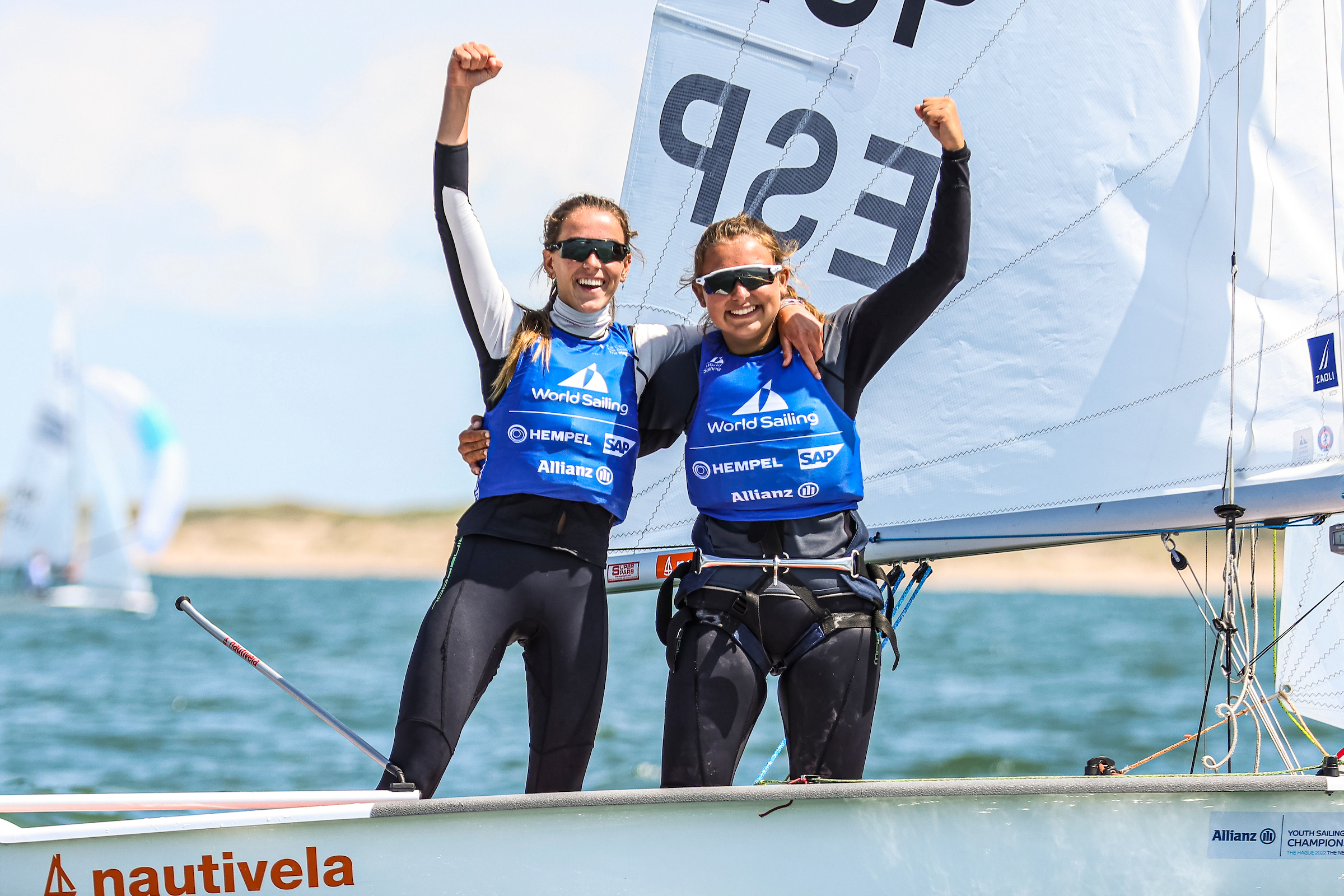 Last year’s bronze medal winners from Israel, Roi Levy and Ariel Gal, started the day in the yellow bibs with a reasonable lead over the fleet. However the Israelis suffered a fall from typical form and found themselves at the back of the fleet. Meanwhile Freddie Parkin and Asher Beck saved the best for last, winning a match race at the front of the fleet with Ema Samarzija and Leon Scheidl (CRO). Having entered the final day in fourth place overall and never in the top three, the Americans rose to the top of the podium just when it mattered. Freddie Parkin matched the achievement of his elder brother Jack, who won 420 gold six years ago as a crew.

“Today showed that you’ve got to keep pushing, keep chipping away because you never know what can happen,” said Beck. Parkin added: “I enjoy the pressure, just keeping on doing what you’ve got to do. This has been a really fun event, super nice people from all over the world, and top class racing against the very best.” 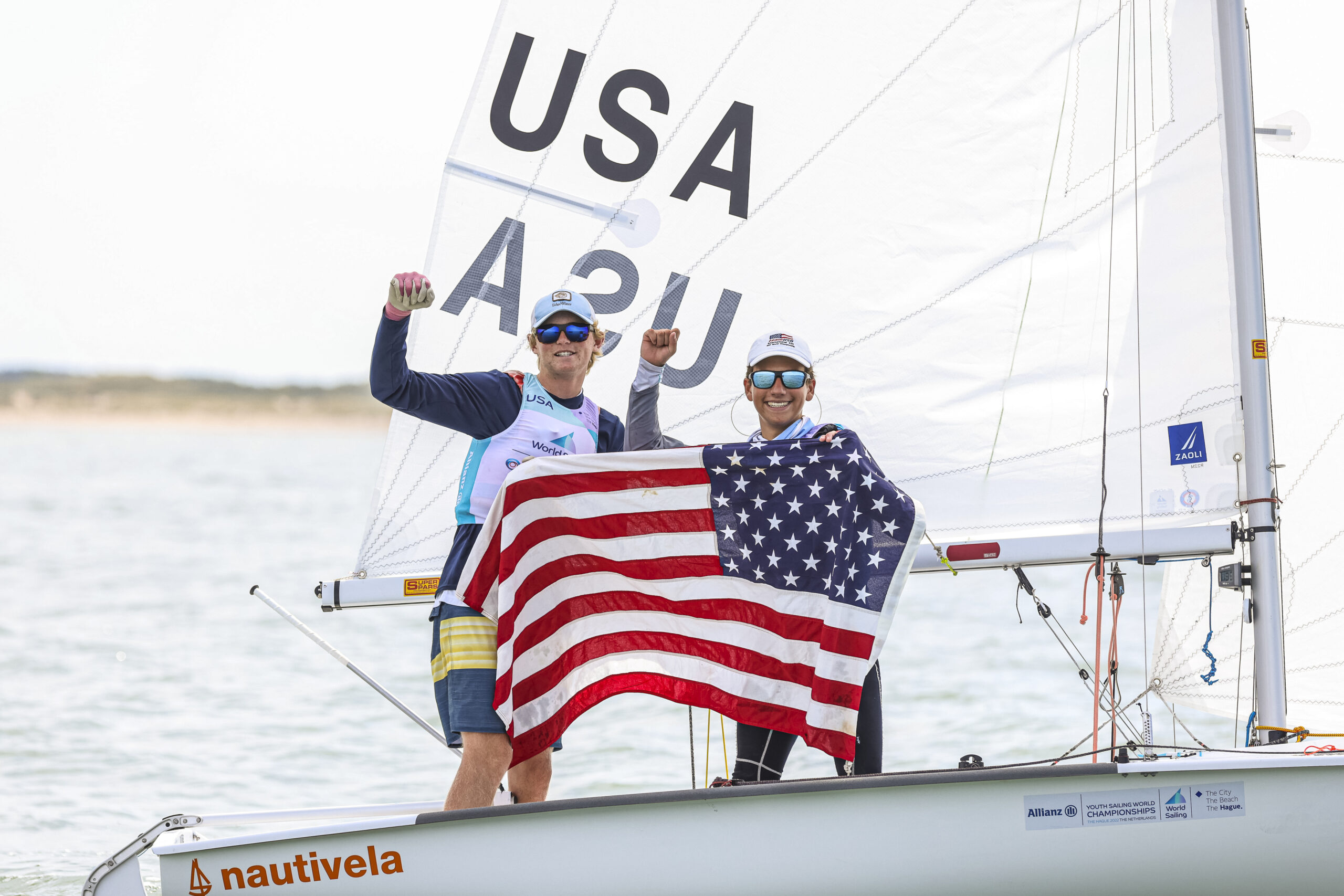 After just missing out on the podium last year, Eve McMahon (IRL) has worked hard at her racecraft and her fitness. The Irish sailor won gold by a big margin ahead of Evie Saunders (AUS) and Roos Wind (NED) who took silver and bronze.

“I’m really proud of what our small team has achieved here,” said McMahon of Ireland’s all-round performance in The Hague. “Compared with Oman, I think I brought a different mindset this year. There are so many variables in sport so I’m just trying to keep everything consistent and everything in perspective.” 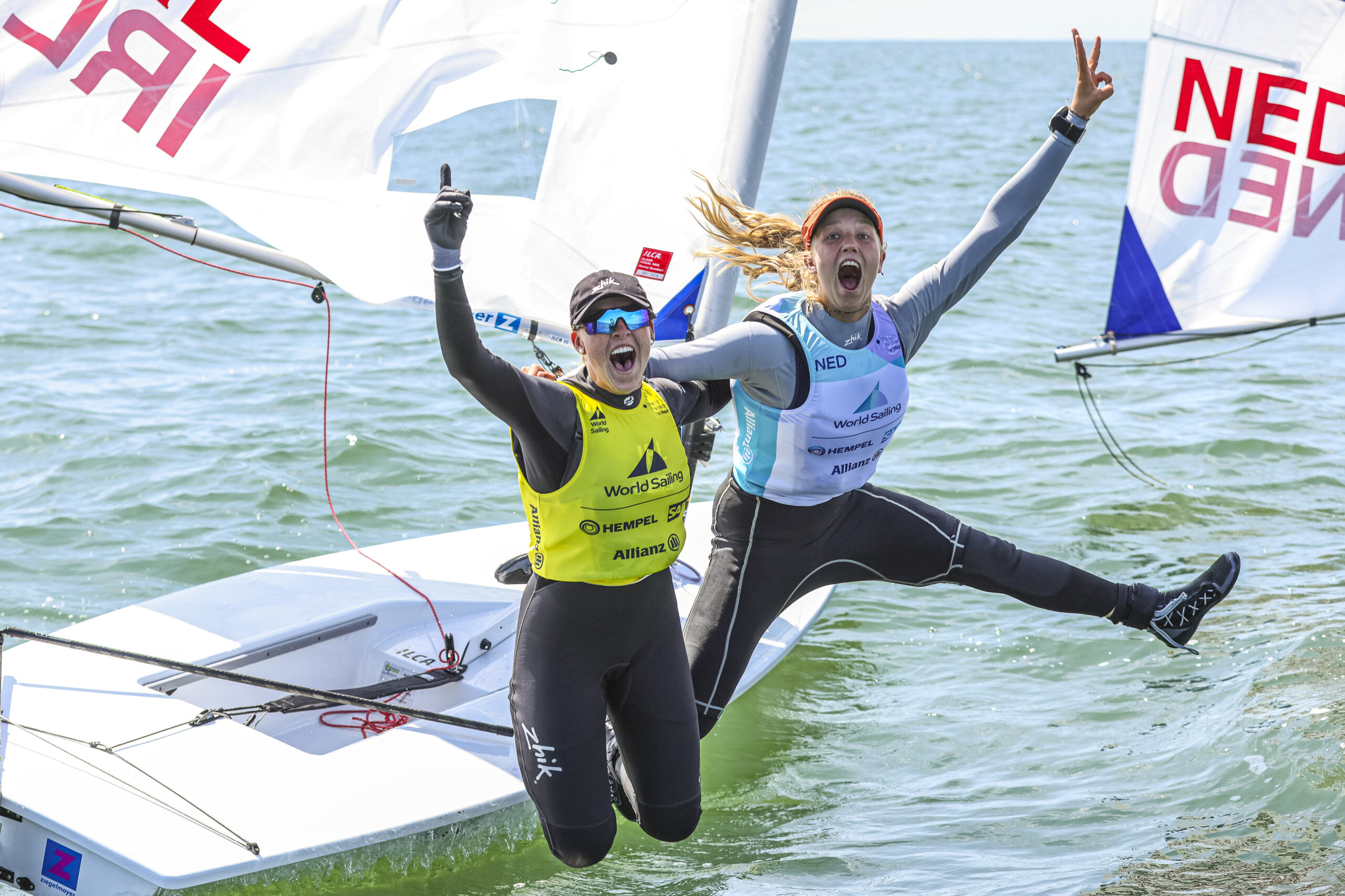 The 15-year-old Rocco Wright (IRL) only graduated from the Optimist to the ILCA 6 dinghy a few months ago but is clearly a fast learner and one to watch for future years at Youth Worlds. It was a very close battle between multiple sailors in the last-race showdown. Wright took gold by a single point from last year’s winner Sebastian Kempe (BER). Kempe won silver by beating Ole Schweckendiek (GER) on tiebreak, so bronze to Germany.

“I came here hoping for a top 10 but not really knowing if I was good enough,” said Wright. “To win here at my first world championships is a dream come true. I’m just amazed and really excited. I can’t wait to celebrate with my friends and family and obviously it’s been a pretty good day, a pretty good week actually.”

The Swiss and the Spanish had been battling over the yellow bibs all week and it went right down to the wire. Daniel and Nora Garcia de la Casa (ESP) finished second on the water just ahead of Axel Grandjean and Noémie Fehlmann (SUI) in third, but it was the Swiss who won overall by a single point.

“We can be proud of ourselves, to win the championship,” said Grandjean. “Last year, we didn’t win, we finished third which was also good. But we really wanted to win this year and now our target is achieved.” 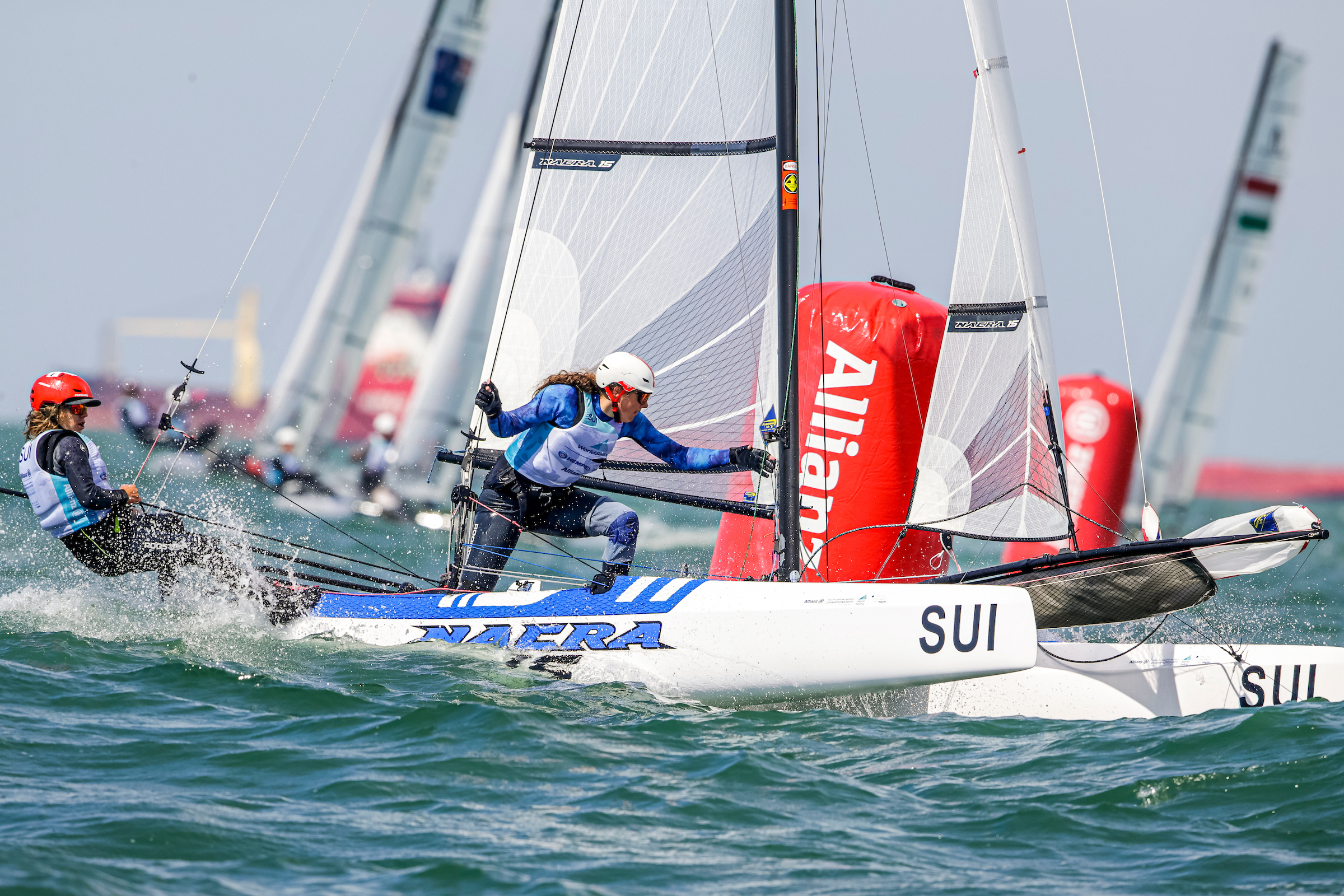 New Zealand had been closing in on Argentina all regatta but today Maximo Videla and Tadeo Funes de Rioja (ARG) won the final race by a massive margin while the Kiwis slumped to an uncharacteristic 20th place. So gold went to Argentina while Santiago Sesto Cosby and Leo Wilkinson (GBR) snuck in for silver ahead of George Lee Rush and Seb Menzies (NZL) who had to settle for bronze.

“We came here aiming for a medal,” said Videla, “and to get the gold feels incredible. The New Zealand team, they had a difficult first day but they were getting closer each day. So to end up winning today is a great feeling, to come a long way from Argentina and win here in The Netherlands.” 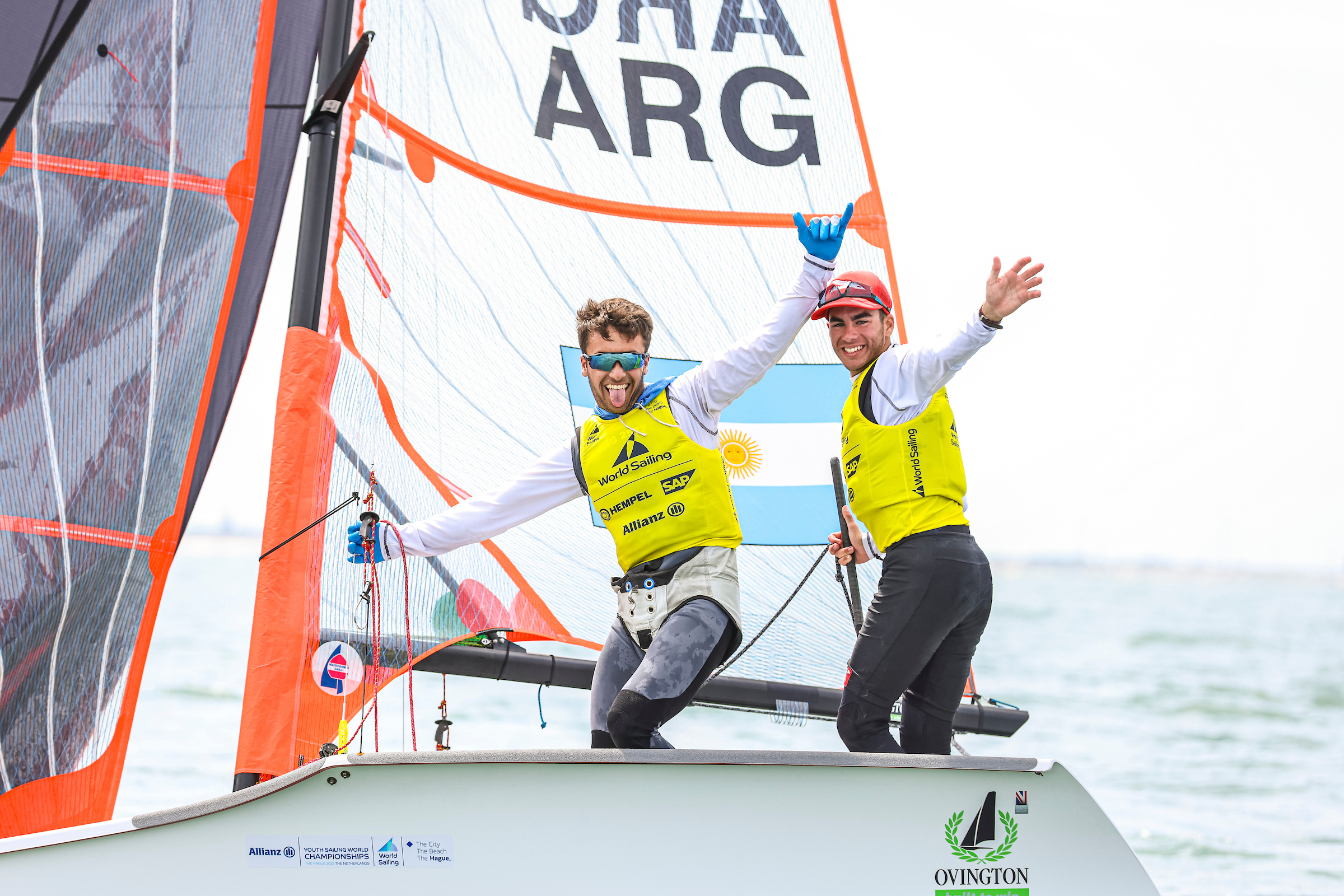 Just like their male counterparts, the girls from Argentina finished in the best way possible. Amparo Stupenengo Pefaur and Julia Pantin (ARG) won the last race and the gold medal, while Lucie Gout and Fleur Babin (FRA) took silver for France. Initially it looked like bronze had gone to Hong Kong but following a protest by the Japanese, it was Manase Ichihashi and Rinko Goto (JPN) who took the final step of the podium.

Pantin said: “This is like, huge! I don’t know how this happens. I can’t believe that we have just won. It’s amazing. It’s been quite close in the class, obviously, it’s been a good battle all the way.” Pefaur added: “Our main goal was to have fun, to make every day like it was our first day.” 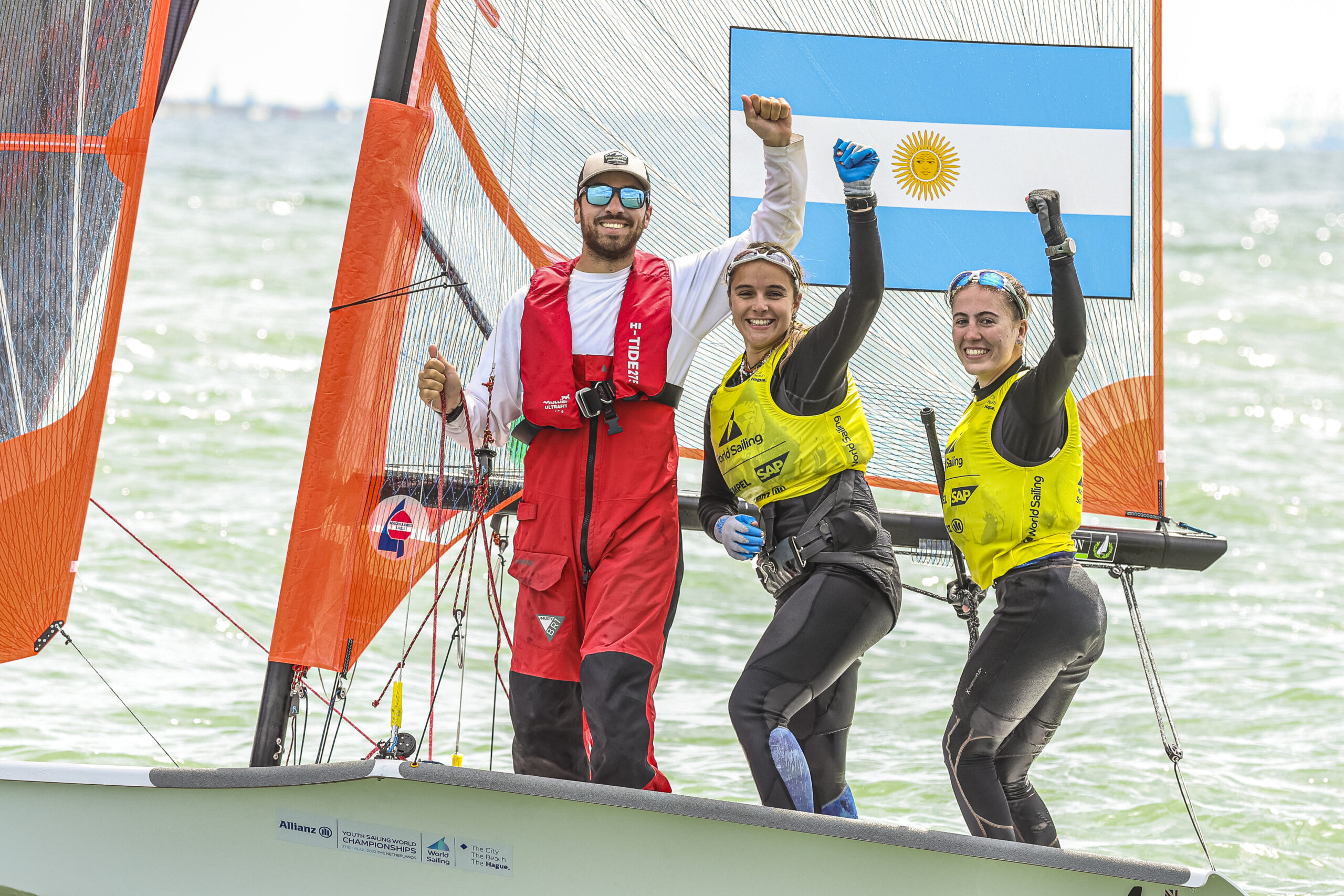 Tamar Steinberg (ISR) put in a pitch-perfect performance on the Youth iQFOiL, winning all 10 races in her fleet. Although some way off gold, Merve Vatan (TUR) was a very clear winner of the silver ahead of Lina Erzen (SLO).

Steinberg commented: “Before the competition I knew I had trained really hard. And I knew I had delivered. And I just wanted to have a good competition and be able to express myself, to show what I can do.” 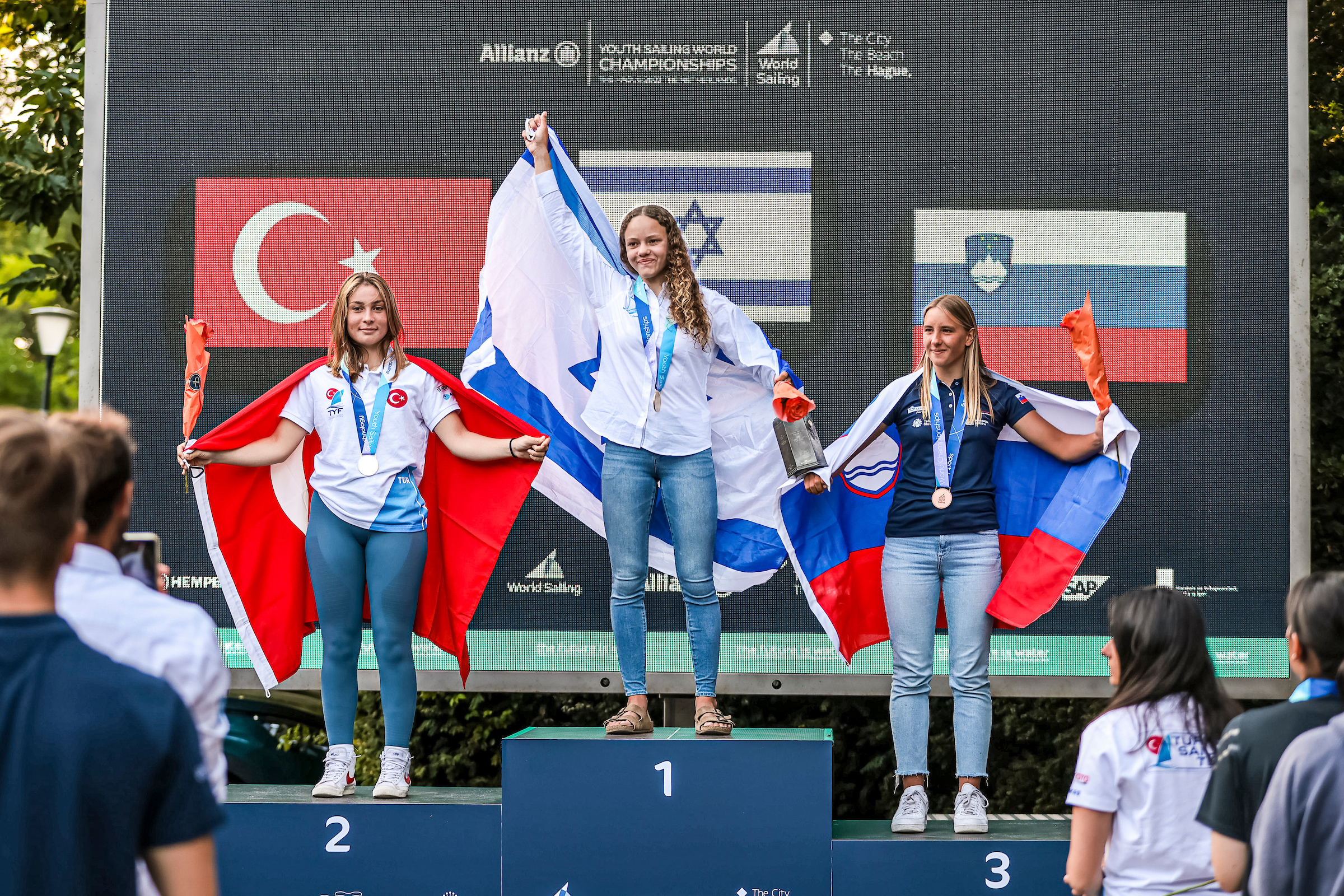 Charlie Dixon (GBR) was almost as dominant as Steinberg in the women’s fleet, counting nine wins from a total of 11 races in the Male Youth iQFOiL competition. Nacho Baltasar Summers (ESP) came on strong towards the end of the regatta but not quite enough to overtake local hero Hidde van der Meer (NED) who held on for silver.

“I’ve had a very good week,” said Dixon. “I didn’t know what to expect here. We had a training camp back in the UK and our initial goal was to sail around the course, get round, get foiling and just sort of see where we come. And maybe if we can look at a top 10 result we would have been happy with that. It was good to get a proper course race today rather than just the slalom that we did in the other races. I wanted to show that I’m an all-rounder, and at the windward mark I got to execute a foiling tack at a crucial moment and it worked out for me. To win the gold here, it’s a really good feeling.”

The 2021 silver and bronze medallists elevated to gold and silver respectively this year. Julia Damasiewicz (POL) scored a string of first and second places to record a very deserved victory on the foiling kite, while Héloïse Pégourié (FRA) was similarly comfortable in second place. Derin Atakan (TUR) took bronze for Turkey.

“I missed the gold last year but this time it has come good,” said Damasiewicz. “I was on fire today, five races and five bullets so a nice way to finish the regatta. Congratulations to all the competitors, we all did really well and the standard is getting better and better.” 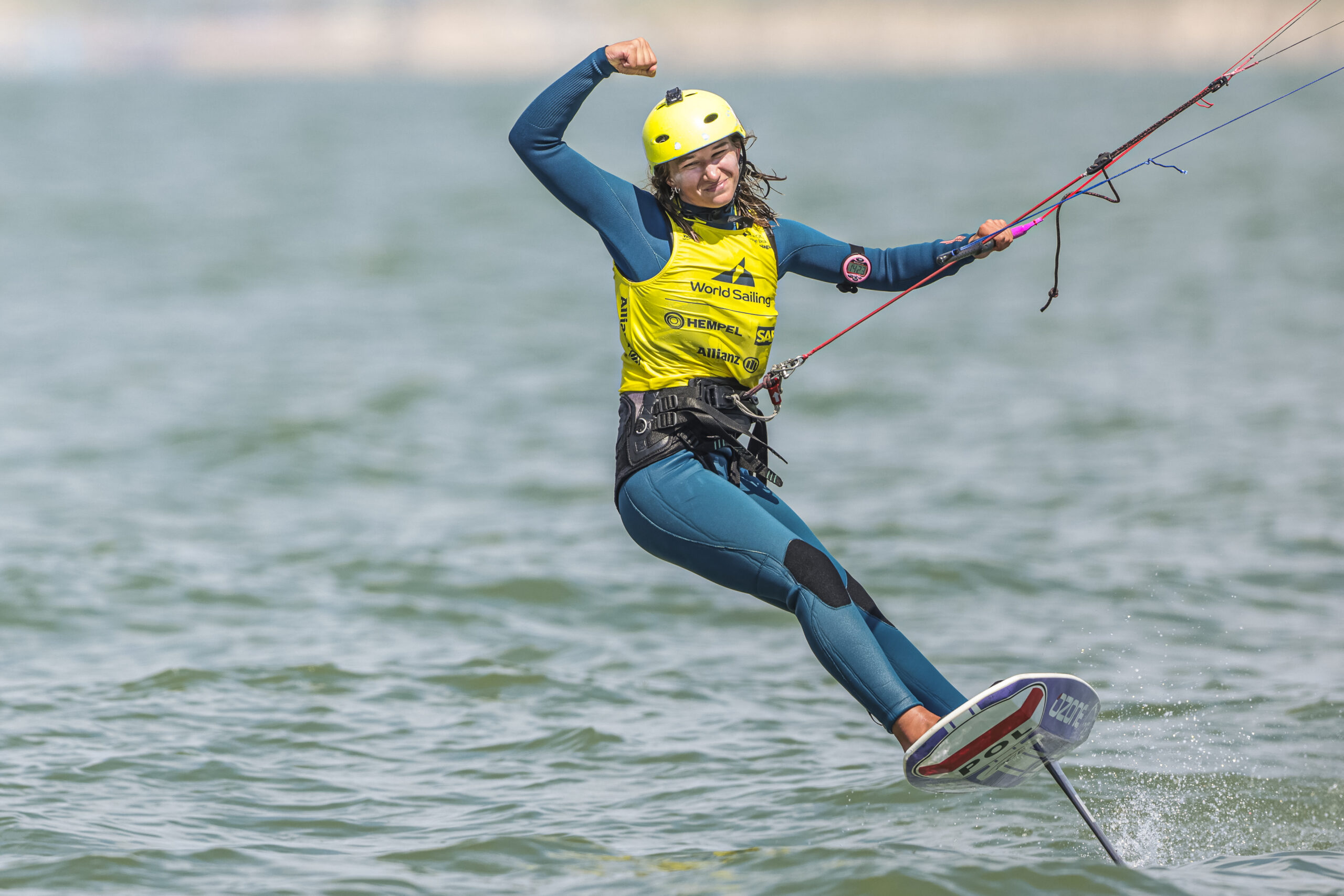 Repeat gold and silver medals from 2021 for Max Maeder (SGP) and Riccardo Pianosi (ITA) respectively. In a similar pattern to last year’s event in Oman, the Italian was getting the better of his arch rival in the early stages. But on Wednesday in the stronger breeze, Maeder re-exerted his experience to score a string of bullets which saw the 15-year-old from Singapore back into gold, the 16-year-old Pianosi again with silver. Young as they are, these two have many more Youth Worlds battles ahead of them. In a distant bronze was Jakub Jurkowski (POL).

“Hats off to everyone,” said Maeder. “The level has gone up so much since last year. I want to congratulate everyone, especially Riccardo. He gave me a real run for my money. It’s taken this championship to a whole new level and I look forward to it getting even bigger in the future.”

This evening the 431 sailors from 67 nations celebrated the end of a successful competition at the Closing Ceremony.

The team from Ukraine was awarded the Bengt Julin Trophy for kindness and fair play, an award given to whoever the competitors believe has done the most to represent the values encouraged at the Youth Worlds.

It has been a week of great competition held in a spirit of friendship and shared love for the sport of sailing. Some of the older sailors have already said this will be the last time they race in a junior class before moving on to other things in the sport, maybe an Olympic campaign. For others it is back to their studies before they turn their attention to next year’s sailing goals, perhaps the 2023 Youth World Sailing Championships.

For more news, photos and results from The Hague, go to http://worldsailingywc.org 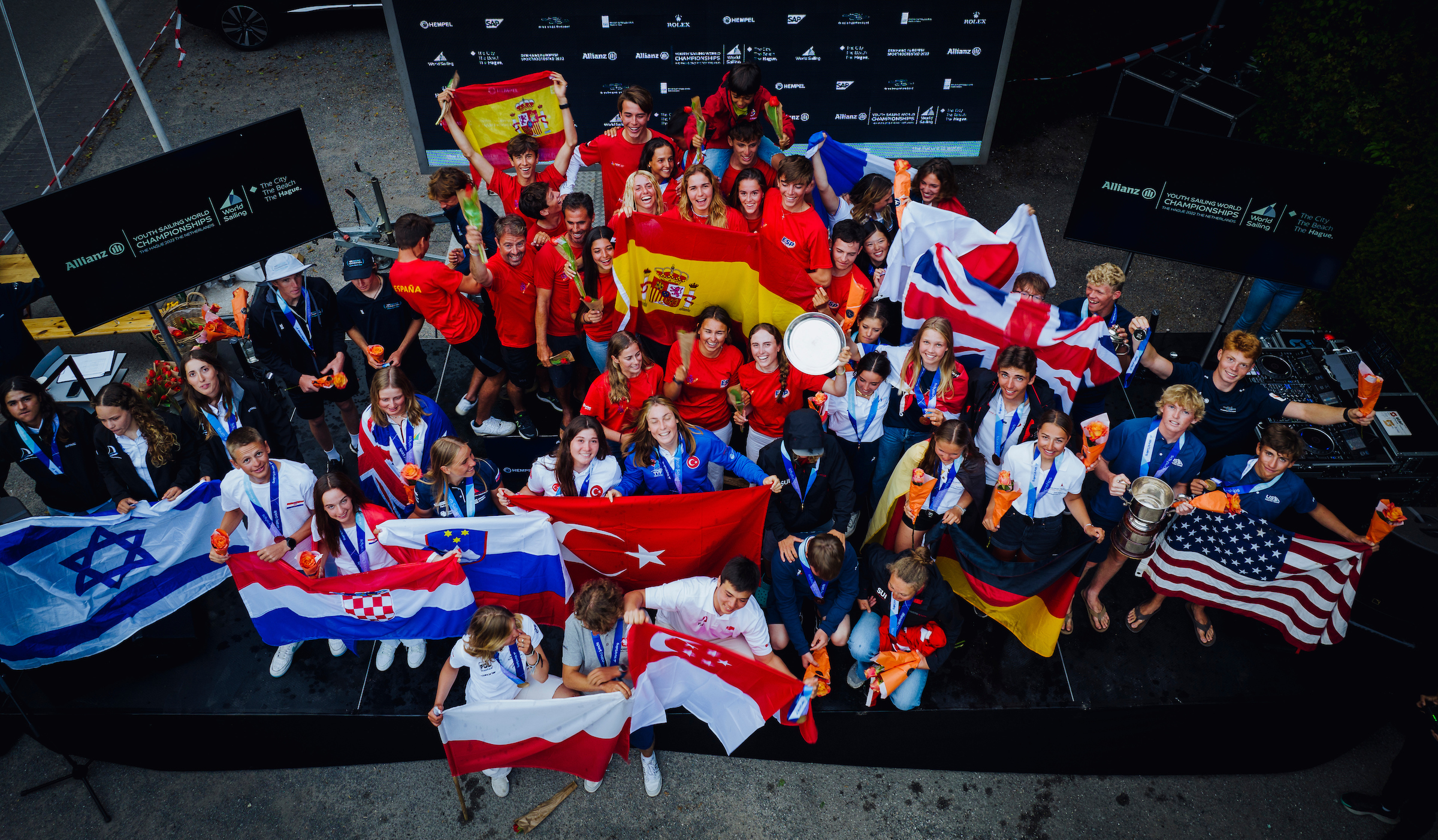 Subscribe to World Sailing’s newsletter for updates straight from the Youth World Championships and across the sport of sailing.